Vitamin K is a group of fat-soluble vitamins which have several important functions in blood clotting and synthesis of protein. Its importance was first noted in 1929 when examining blood clotting in chickens. There are two main types of vitamin K – vitamins K1 and K2. Vitamin K1 is the most prevalent source in the diet, though it is converted into vitamin K2 in the body.

An introduction to vitamin K

Vitamin K plays many important roles in the body. Most prominently, it is known for promoting blood clotting, which allows wounds to heal quickly, and with as little scarring as possible. It is also thought to reduce bruising after injury.

Working together with calcium, Vitamin K helps to promote good bone health. This vitamin helps to seal the calcium into the bones, increasing bone density and strength, reducing risk of fractures and osteoporosis. By sealing the calcium into your bones, it also prevents calcium from hardening in the lining of your arteries and other tissues, thus reducing risk of cardiovascular disease.

Vitamin K is also thought to play a role in improving insulin sensitivity and reducing glucose levels after meals. This is seen to reduce risk of developing Type 2 diabetes.

It is possible to obtain vitamins K1 and K2 through the diet. It is a fat-soluble vitamin so can be stored in the body. This means it does not need to be consumed each day, although the body requires 1mcg of vitamin K for every kg of body weight, that is, a person weighing 65kg needs 65mcg of vitamin K.

Vitamin K1 is largely found in leafy green vegetables, and vitamin K2 is more common in dairy and meat products. 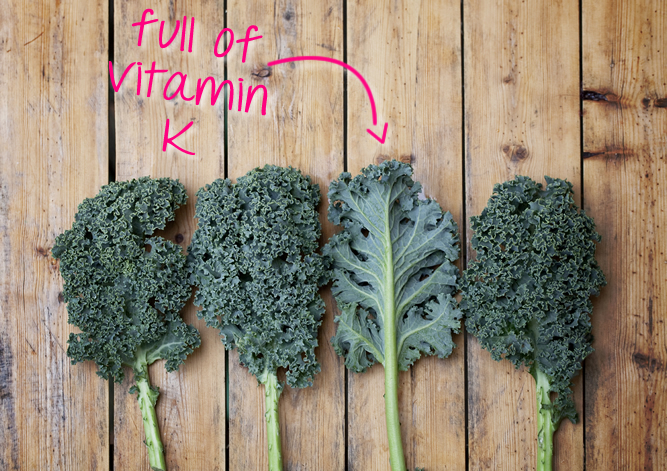 Primary vitamin K deficiency from poor diet is uncommon in adults, although it can occur in those who have cystic fibrosis, inflammatory bowel conditions or damaged livers, such as through alcoholism. It is most common in newborns, younger than a week old, as their colons are not properly able to absorb nutrients.

The most common symptom of vitamin K deficiency is bleeding from the nose and gums, heavy menstrual bleeding and easy bruising. The blood will not clot as effectively, meaning that more blood is lost through injury, and wounds will be slow to heal. Vitamin K deficiency may also mean that calcium is deposited in the soft tissues and arteries, potentially leading to heart problems.

Too much vitamin K

There is little evidence to indicate what the full effects of taking too much vitamin K may have. Taking less than 1mg of vitamin K1 or K2 is unlikely to result in unwanted side-effects. However, there are synthetic forms of the vitamin, K3, K4 and K5, which may cause side-effects if taken in excess. It may begin to reverse the effects of blood thinning medications. Too much vitamin K may also seal too much calcium into the bones, leading to weakness in the bones. Returning to an adequate intake of vitamin K in the diet should resolve symptoms.