Potato is a tuberous crop which is estimated to have been first domesticated as long as 8000BC in modern day Peru. Now it has spread throughout the world and is a staple crop in many countries, most notably Europe. It is the fourth most common food crop in the world. 2008 was declared as the International Year of the Potato by the United Nations, which helped to raise awareness in developing countries of the role the potato can play in the diet.

An Introduction to Potatoes

Potatoes are from the Solanaceae family, which includes tomatoes and aubergines. The part of the plant which is normally eaten is the edible tuber. Other parts of the plant, including the berries it produces, contain alkaloid solanine making them unsuitable for consumption.

Potatoes are not difficult to grow, yielding abundantly, but they are susceptible to disease. For this reason they tend to survive better in harsher environments, with cold or strong winds that kill pests and prevent the spread of potato virus pathogens. However, harsh frosts can cause potatoes to rot.

Potatoes began to feature in art in the late 19th Century, particularly paintings of potato pickers. In 1949 the popular figure Mr. Potato Head was invented, the first toy ever to be advertised on television..

With several thousand varieties of potato, we are certainly spoiled for choice, some lending themselves better towards being boiled, mashed, fried or roasted. Varieties of potato can be split into seven main categories, each with their own distinct characteristics.

White potatoes have a delicate skin, which adds a nice texture to dishes without the need for peeling. They can be boiled, steamed mashed or fried.

Yellow potatoes have a yellowy or golden flesh. They have a naturally buttery texture, allowing you to make great tasting dishes but with less fat. They roast or grill well too.

Russet potatoes have a dark and rough brown skin and white flesh. Medium to large in size, with a high starch content and low moisture retention these potatoes are good for baking, mashing or frying.

Red potatoes, unsurprisingly, have a deep red skin and waxy texture. They are small to medium in size and hold their shape well when being cooked, making them suitable for potato salads or for roasting.

Purple or blue potatoes are distinctive for their vibrant colour. They have a nutty flavour and firm texture making them a vibrant addition to salads. They can also be roasted or grilled.

Fingerling potatoes come in a variety of vibrant colours, from purple to orange to white. They have a long oblong shape and an earthy flavour, which lends itself well to salads.

Petite potatoes also come in a variety of colours but are the size of a large marble. Although small, the flavour is intense, and they are quick and easy to prepare as they can be cooked whole.

Potatoes are tubers, whose purpose is to provide next year’s potato plant with a food supply to allow it to grow and flower. For this reason, potatoes are also nutritious for human consumption. Although it is possible to eat potatoes raw, they are hard to digest and have been known to cause abdominal cramps and gas or bloating, which is why most people choose to eat them cooked.

Potatoes are very high in potassium, and also contain iron and vitamins C and B6. Not only this, but potatoes are fat and cholesterol free.

Generally speaking, people enjoy the comfort of hot potatoes but are not aware of the health benefits attributed to this popular staple.

Potatoes have been investigated for properties in lowering blood pressure. This is because they are very high in potassium, which is thought to widen blood vessels. The skin of the potato is particularly rich in potassium. 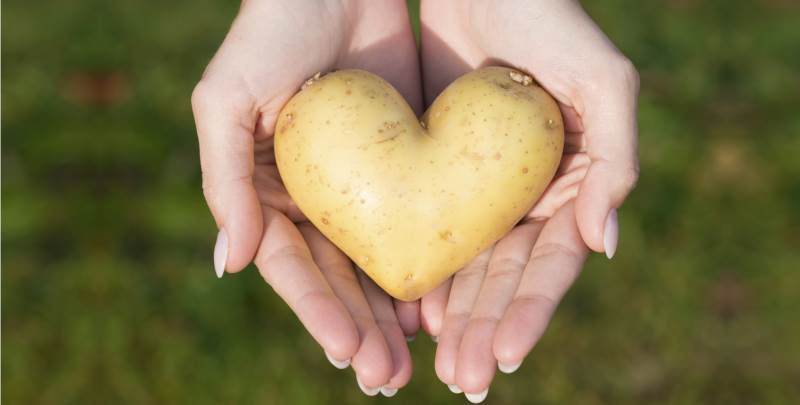 Potatoes are also high in the B-vitamins, particularly vitamin B6. This vitamin is important for neurological health as it balances brain chemicals, stabilising mood. Potatoes also help to maintain good levels of glucose in the blood, which has been seen to be linked with good brain function.

A medium baked potato contains about 45% of the Recommended Daily Intake of Vitamin C. Vitamin C is important for your immune system, helping to fight infections such as the common cold. Potatoes used to be eaten on ships as a preventative against scurvy.

The health benefits of potatoes