Iodine is a trace mineral, and it is one of the heaviest that the human body needs. It is used in the thyroid glands, playing a role in the creation of thyroid hormones. Iodine is particularly concentrated in seawater, making sea-fish and seaweed good sources of iodine. Many other types of food are iodine-fortified, so it should be possible to get all the iodine the body needs through diet.

Why do we need iodine?

The most researched role of iodine in the body is its importance in making thyroid hormones. These hormones control cell metabolism, helping to produce and use energy efficiently throughout the body. These hormones also help with brain and bone development in infancy.

About 70% of the iodine in the body is spread throughout other tissues, including the salivary glands, brain and pancreas. Though the role of iodine in these other tissues is not as well known, it is understood that these tissues and organs cannot work as efficiently if iodine deficient. Iodine is seen to play a role in alertness and IQ levels, as well as regulating fluids in the body.

The body cannot produce iodine, so all that is needed must come from the diet. The average adult requires 140mcg of iodine each day. Though it is available in fruit, vegetables and nuts, iodine is found in the greatest quantities in seafood, eggs and dairy. 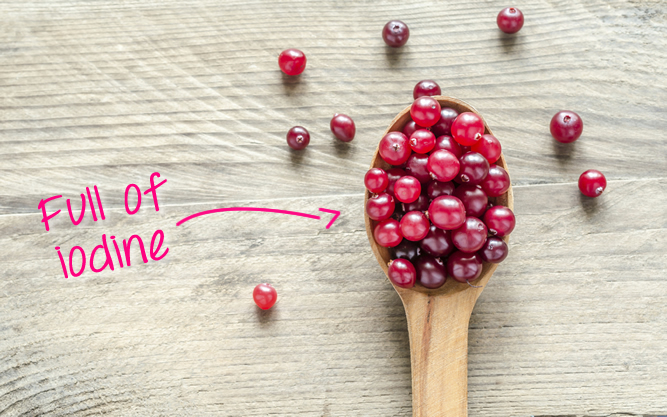 It most commonly manifests itself in the form of thyroid problems, with enlarged thyroid glands in the neck being a characteristic symptom. This can cause feelings of sluggishness or lethargy, as well as causing weight gain and reduced cognitive function and alertness.

Slowly increasing the amount of iodine being consumed, either through diet, or with supplementation, under supervision of a medical professional, should help to treat this condition.

Consuming too much iodine is unlikely to happen simply through dietary sources, and is more likely to be a problem if taking iodine supplements without the guidance of a medical professional. Taking up to 0.5mg of iodine each day is not likely to result in side-effects. However, regular high doses of iodine can cause a range of symptoms.

Initially, stomach pain, nausea and vomiting can occur, but this can quickly develop into thyroid problems, which have similar symptoms to those of iodine deficiency. Particularly severe overdoses can result in weakness, shortness of breath and low blood pressure.