Vitamin E is a fat-soluble vitamin, which acts as an anti-oxidant. It occurs naturally in eight different forms, with alpha-tocopherol being the most common and most active form. Vitamin E is essential for a number of functions within the body, and is normally available through the diet.

Why do we need vitamin E?

Vitamin E is best known to act as an anti-oxidant, protecting cells, particularly cell membranes, against damage. This helps to maintain healthy skin and eyes, and is thought to reduce the risk of age related eyesight problems, such as macular degeneration.

There is research to suggest that vitamin E acts as a painkiller, reducing symptoms of period pain, other PMS symptoms, and pain from inflamed joints, although it does not act as an anti-inflammatory.

It should be possible to get all the vitamin E you require through your diet. It is recommended that the average adult male requires 4mg of vitamin E each day, and the average adult female needs 3 mg. However, it is thought that up to 540mg can be taken daily without side-effects. 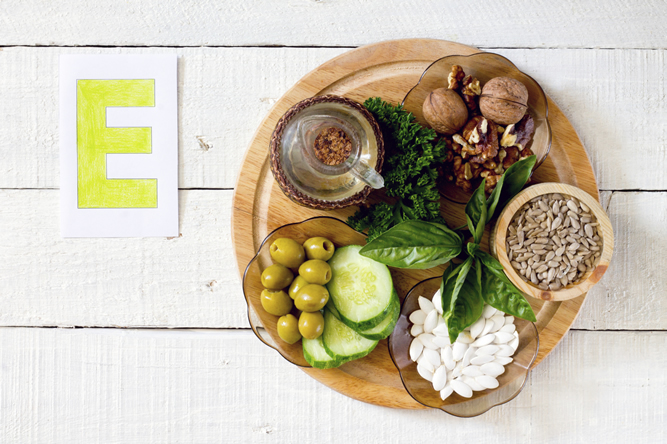 Vitamin E deficiency is very rarely a result of poor diet, but instead caused by certain other medical conditions. Some dietary fat is required in order to absorb vitamin E, so people who have problems absorbing fat, such as those with liver or pancreas problems, Crohn’s disease, Cystic fibrosis, or those who have had a gastric bypass can be prone to Vitamin E deficiency.

This can also occur in premature or very underweight babies, although a vitamin E deficiency in this case can normally be controlled under the guidance of a suitable health professional.

Symptoms of vitamin E deficiency can include mild anaemia, eye and neurological problems. Lack of coordination, muscle weakness and cramps can also occur. It may eventually result in permanent nerve damage and an inability to walk.

Too much vitamin E

This vitamin is fat soluble, which means that excess amounts of the vitamin are not excreted in the urine but stored in the body for future use. There isn’t enough documented evidence to known for certain what effects consistently taking too much vitamin E may have. However, it is thought that overdosing on vitamin E may reduce blood clotting, increasing risk of bleeding, particularly for those taking blood thinners, such as aspirin.