Why does lack of sleep make it hard to concentrate?

If you are finding it difficult to concentrate, it may be related to the time you spend asleep! Learn how lack of sleep affects our brain's ability to drive, shop, learn or even watch the telly. At the end, I also give a few easy tips for getting more shut-eye.

Lack of sleep and concentration

Lack of sleep makes it hard to concentrate because it interferes with the brain's ability to encode (or translate) information that can be stored as memory and later recalled. When short-term memory is affected by tiredness it may be difficult to recall details, concentrate when reading or watching a film, or focus on a task.

Why does lack of sleep make it hard to concentrate?

Concentration is the knack of directing attention (or the mind's eye) on whatever you choose to focus on, for a length of time; whether this is an IKEA self-build diagram or your mum's meandering and confusing gossip pertaining to relatives (and their neighbours - all of who are strangers!). Some people will naturally be better at flexing this concentration 'muscle' than others; however, lack of sleep affects everyone's ability, regardless of your baseline capability.
Have you ever found yourself unable to concentrate while reading, or to follow the plot line of a film because you are tired? As the story unfolds, you may have forgotten the opening scenes, which character is which, so you can make no sense of what is going on. Tired people are more easily distracted when focusing on a task.(1) This can happen because lack of sleep affects concentration and working memory (also known as short-term memory) - the ability to hold on to information while you are focusing on another task.(2)

There are three stages vital for laying down a memory such as a song or someone's face. The brain needs to first encode (or translate) the information so that the brain understands it. Then it's stored away. Finally, the memory needs to be retrievable so that it can be recalled. When lack of sleep interferes with concentration, it affects the encoding bit so that experiences may not translate into memory in the first place, let alone be easy to remember.(4)
Lack of sleep can affect concentration as much as boozing does. A study that compared the effects of sleep deprivation, obstructive sleep apnoea or alcohol consumption on driving ability found that all participants did badly when compared to the sober, well-rested control group!(5) The alcohol-sodden had wobbly wheel control from the onset. The exhausted started off well enough, but invariably their ability to pay attention and control the (simulated) vehicle waned as the drive went on. It's quite scary when you think of how many tired people there must be on the road, driving around, blinking and trying to keep focused. 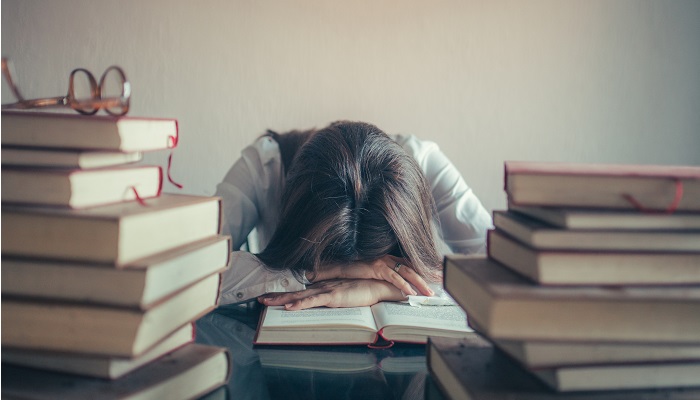 Chronic sleep deprivation, when experienced by students, is associated with lower grades and smaller graduation rates.(6) It doesn't just give people headaches or make them more emotional. The solution can be simple - going to bed a bit earlier on school nights can be a game-changer. In one study, teenagers who did this improved their mood and overall mental performance particularly their visuospacial processing (important for puzzles and map reading).(7)
For some of us, getting more sleep is simply a matter of deciding that we would like to invest in our mental abilities by being a bit more disciplined. Choose a bedtime that ensures that you have plenty of time in bed for a good night's slumber. Ideally, that should be at least seven hours, and as much as nine hours, of rest. I get up at 7 am so try to be in bed by 10.30 pm the night before to give myself at least eight hours.

Too long to get to sleep or waking through the night?

If it takes you too long to get to fall asleep or, if you find yourself waking through the night, here are a few sleep hygiene tips that can be helpful:

'Helps me sleep. I've used it on and off for years and it really helps'

Find Dormeasan® Sleep Valerian & Hops drops in a store near you